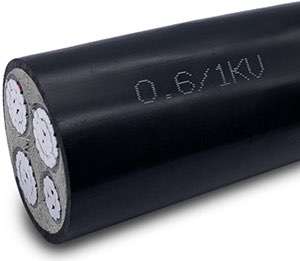 The function of armour

Maybe someone think the armour materials can against the bad condition, however the truth is the armour only provides additional protection where mechanical pressures has the potential to bring harm to the power cable, such as direct burial, outdoors or underground. Compared to the ordinary PVC cable, the armoured cable has lots of advantages. The armour also enables the cable to withstand higher pulling loads. Talk about this point, one thing must be referred, we have got to remember that the armour not provides any protection relative to climatic conditions, such as meeting with the extremely frozen weather.

In general, the construction of an steel taped armoured cable or steel wire armored cable consist of six parts below:

Conductor materials: plain annealed stranded copper or aluminium, in the power cable, sometimes the aluminum is also encouraged to be used, the performance is enough and the price is less expensive than copper conductor.

Insulation materials: the most common used materials for insulation is cross-linked polyethylene (we more usually use the contraction XLPE to refer to it) can resist to extremely high temperature condition and perfect dielectric power- XLPE can improve the electrical properties of armoured cable largely.

PVC Bedding: bedding is a vivid description. Actually it is just a layer to form a protective barrier between the insulation and the armoured materials, in some way PVC bedding design can help armoured cable to prevent the moisture or acids efficiently.

Armour layer: a steel tape or steel wire armoured layer provides mechanical guard to strengthen the ability of power cable to undertake the mechanical pressures once the power cable is installed in extremely condition and armour layer also could be regarded as the most important part as for the product expectation.

Sheath layer: Sheath layer belong to the most common and visible part in power cable. As for as the customers JZD Wire&Cable met with in the past, sometimes some customers would describe sheath as the jacket. each composed parts of the cable are held tightly together by a jacket offering a further level of protection, cause the power cable usually are used in most of extremely badly conditions. Black sheaths can be carbon-loaded for UV stability, because in some regions, sometimes the ultraviolet will be very strong, black jacket can help the cable absorb too much sun energy, otherwise it will be much harmful to power cable.

Rated voltage: voltage ratings of 600/1000V, 6.35/11kV and 19/33kV, JZD Wire&Cable provides the 600/1000V to our customers, as for the other rated voltages specifications, we can make it, however we need discuss more deeply for further knowing your require.

The construction of our various types of armoured cable (US spelling armored cable) differs according to their intended application and may also include steel tapes, protective screens and materials suited specifically to the installation conditions. We offer a comprehensive range of IEC standard armoured power cables, manufactured in accordance with a number of European and International standards including IEC 60502 and CE standard(for single core armoured power cables).

JZD Wire&Cable' range of armoured power cable is available with a Stranded Copper (Cu) or Stranded Aluminium (Al) conductor and with a Polyvinyl Chloride (PVC) (what we need emphasize is that we don’t usually provide this sheath)or Low Smoke Zero Halogen (LSZH) jacket, LSZH sheathings are recommended for being used in high density enclosed areas, and are obliged in some particular public places, like the city central plaza or cinema.

How to Purcahse The Flame Retardant Cable?